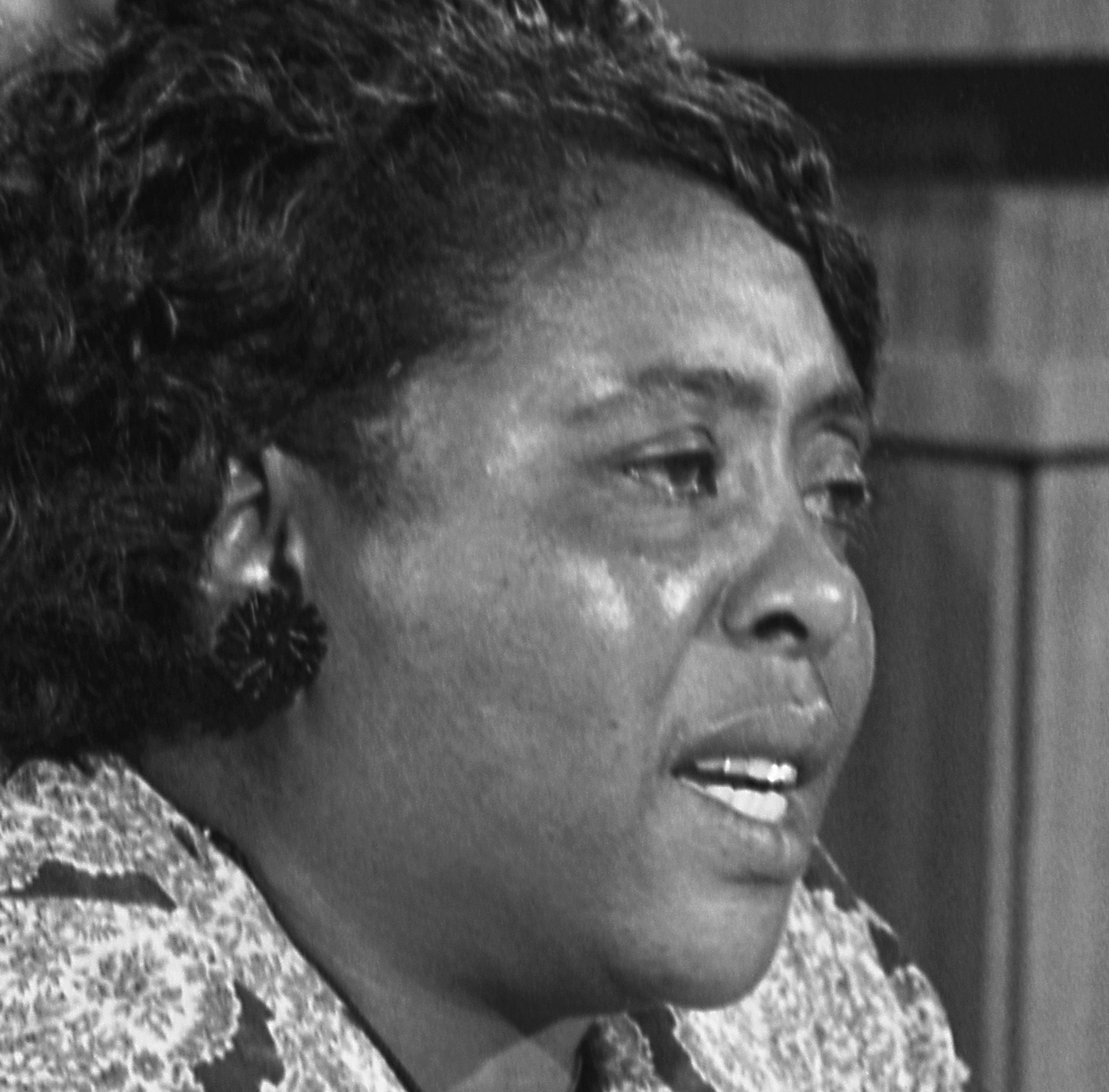 March is Women’s History Month! Since WE CAN’s mission is to educate, engage and activate women of color, we will use this month to celebrate women of color. Women of color are the unsung SHEroes of our time—leading in the arts, science and engineering, medicine and health, business, social work, academia, philanthropy, and politics—while fighting for equality and freedom. For this series, WE CAN will focus on the activists who made a difference! The ones who went before us and sacrificed much so that we could have the rights and privileges we enjoy (and sometimes take for granted) today.

It would be easy to make our posts about the struggles, and horrible acts of violence levied against women of color in American history as they fought for freedom and equality. Instead, WE CAN offers you a CELEBRATION of the majesty and wonder of women of color! We hope you enjoy this series and ask that you share the names of your SHEroes in the comment section below. 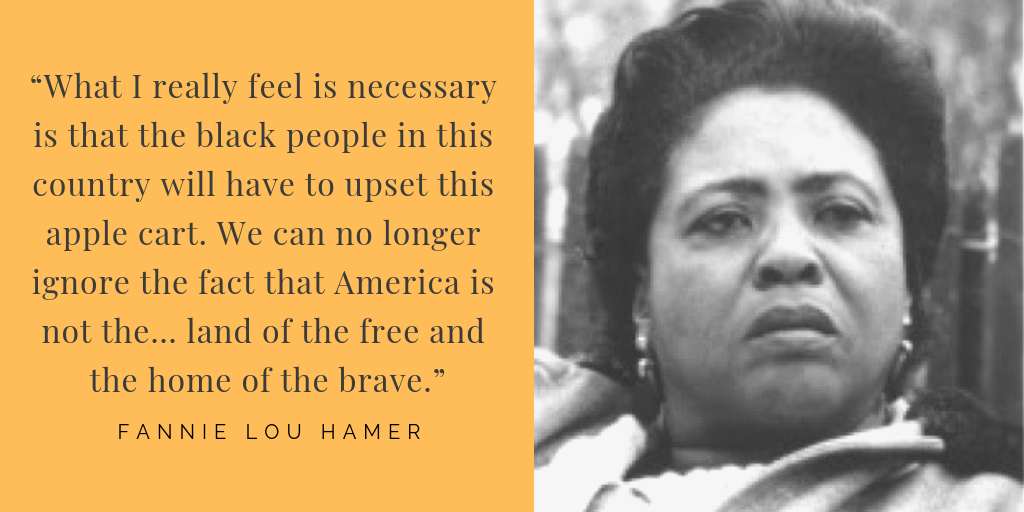 I must admit that Fannie Lou Hamer is one of my favorite SHEroes. Her most famous line, “I’m sick and tired of being sick and tired,” is often quoted to characterize the long-suffering nature of the fight for equity and freedom. Her life story is complex, and this post could NEVER do justice to the important role she played in the civil rights movement, so I encourage you to learn much more about Fannie Lou Hamer and her contribution to our collective liberation. Please see these sources for more information. You won’t be disappointed.

Fannie Lou Townsend was born on October 6, 1917, in Montgomery County, Mississippi, the youngest of 20 children. As the daughter of sharecroppers, Hamer began working the fields at an early age. Sharecropping was a hard way of life, and her family struggled to make ends meet, and often went hungry. Despite the challenges, Fannie Lou was literate—which will be important to her future.

Fannie Lou married Perry “Pap” Hamer in 1944 and worked along-side him barely getting by. In 1962, she attended a protest meeting where she met civil rights activists who were encouraging African-Americans to register to vote. That meeting was a turning point for her, and she became active in helping with voter registration efforts. 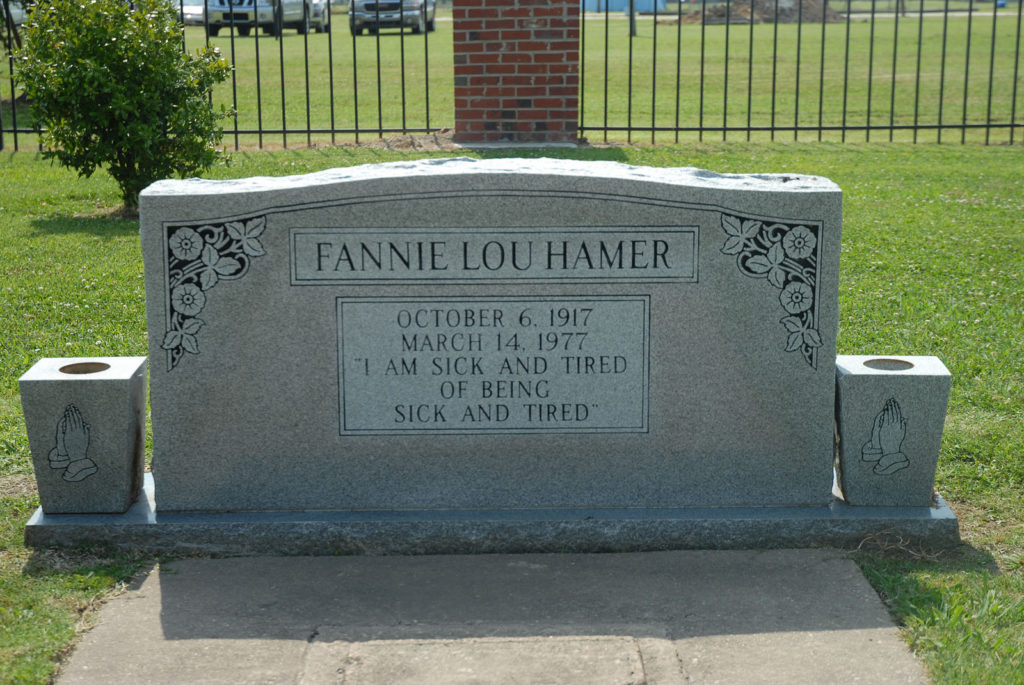 One of the reasons Fannie Lou Hamer was so successful in motivating others is that she shared her own stories of life, shining a bright light on the racism perpetrated against African-Americans living in the South. In 1964, working with the Student Non-Violent Coordinating Committee (SNCC), she helped organize the 1964 Freedom Summer African-American voter registration drive in her native Mississippi.

Like other African-American women of her time, Mrs. Hamer was a leader and powerful advocate for civil rights. Working with the Student Nonviolent Coordinating Committee (SNCC), she led and participated in acts of civil disobedience to fight racial segregation and injustice in the South. Her efforts were met with strong opposition, and she was arrested, beaten and often threatened. She was not deterred and was one of the founders of the Mississippi Freedom Democratic Party. The Mississippi Freedom Democratic Party gained national notoriety when they opposed Mississippi’s all-white delegation to the 1964 Democratic convention. Click the link below to listen to her speech at the convention—it is well worth your time!

In 1965 even though, Mrs. Hamer unsuccessfully ran for Congress in Mississippi, she was instrumental in raising national awareness about the plight of Mississippi’s low-income individuals and families. We should all follow her example and shine a bright light on the needs we see and experience in our communities.

Before her death in 1977, Mrs. Hamer created organizations to increase business opportunities for minorities and to provide childcare and other family services. She was the epitome of what it means to be an effective advocate. Many people have written about her and her contribution to the civil rights movement. I’d like to leave you with this quote from Robert Jackall, a Georgetown University Professor and civil right volunteer, from At the Dark End of the Street: Black Women, Rape, and Resistance—a New History of the Civil Rights Movement from Rosa Parks to the Rise of Black Power.

[su_quote]“It was her unvarnished, earthy forcefulness, devoid of all pretense; her unshakable conviction in the justness of her cause, proved by her personal sufferings and the risks she continued to take; her ennobling vision of racial harmony and of personal redemption for those who seek it; and her ability to articulate her ideas with a powerful religious rhetoric that had deep resonance for her audience but that has no trace of practiced cant.”[/su_quote]

Other African-American Women Activists Who Inspire Me

Known as the “Queen mother” or “Grandmother” of the Civil Rights Movement, Clark believed that “…knowledge could empower marginalized groups in ways that formal legal equality couldn’t.”

Many think her only claim to fame is that she was married to the late Medgar Evers, but Myrlie was an amazing leader in her own right. A successful businesswoman, city leader, and magazine editor, Mrs. Evers led the NAACP for several years.