It is incredibly sad that we STILL need to declare that Black women deserve equal pay for equal work. Sad that so many Black women daily toil away at work that never quite pays enough to pay the bills and provide a good life. Shouldn’t hard work be enough to ensure you are not living in poverty? While we have our noses to the grindstone, we must also come together and lift our voices and flex our activist muscles to fight for Black Women’s right to equal pay. 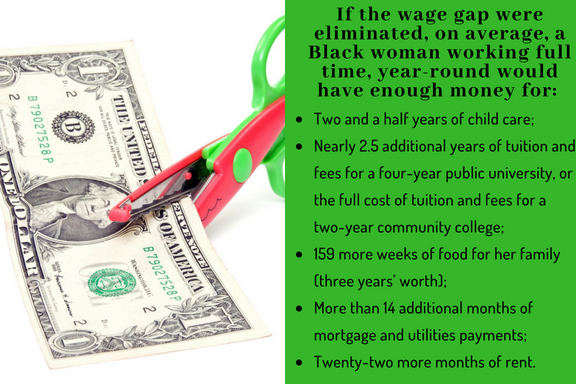 WE CAN knows that most of you are living the daily nightmare of ‘hustling backward’ at jobs that never seem to be enough to pay your bills, never mind trying to get ahead and save. Today we draw a line and demand equal pay for equal work!

What Can YOU Do?

1. On Tuesday, August 7 at 2:00 – 3:00 pm ET, join the Social Media Storm using #BlackWomensEqualPay and #Demandmore. Make sure your online network knows you stand with a Black woman’s right to equal pay!

2. Tell Your Equal Pay Story! Submit your equal pay story to WE CAN to help us educate policymakers about how pay inequality is harming you, your family and your community.

3. Follow WE CAN’s Make Work Pay Campaign to learn how you can take action for equal pay all year round!

Fighting for equal pay will take all of us, working together, to win the right to a fair wage for hard work.

Women’s Equity Center and Action Network (WE CAN)